Will You Change the World? 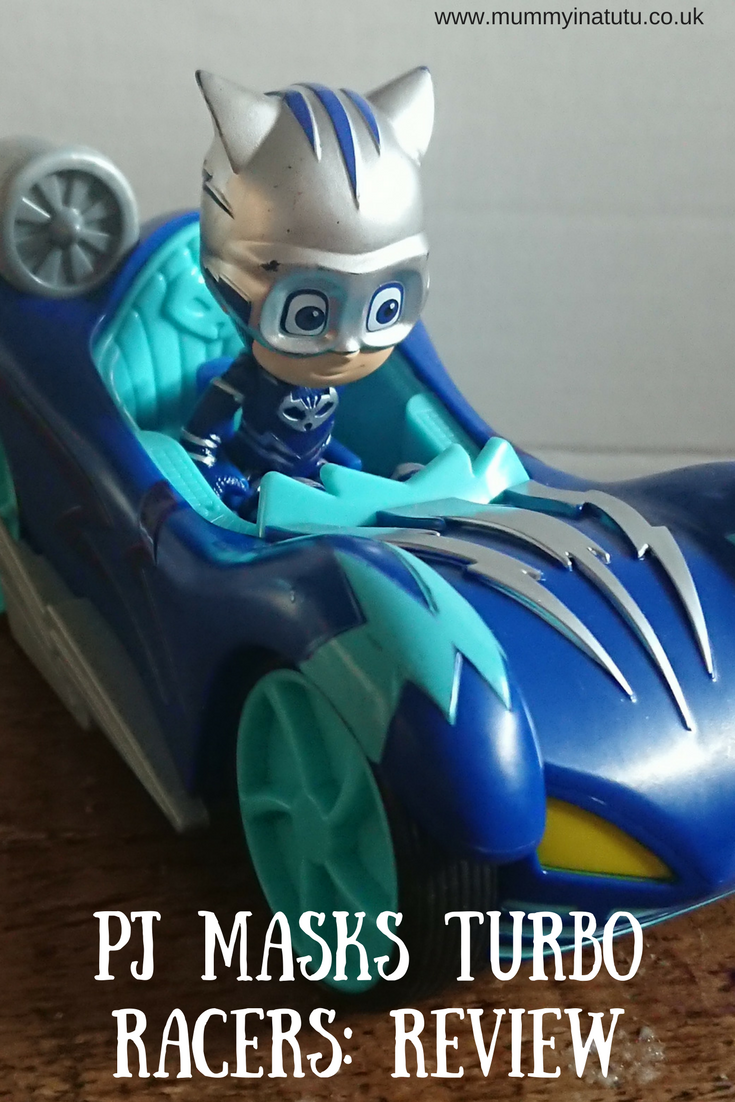 As I’ve said before, my little has quite an eclectic taste when it comes to toys. She doesn’t fit into any brackets when it comes to what she likes and dislikes which I love about her because I could literally give her a piece of ribbon or a plastic bowl and she’d find a way to play with it and make it fun for herself – imagination is a gift! However, she does have some favourite types of toys and two of those are cars and figurines. She disappears into her room or play house for hours on end creating her own little world of make believe and occasionally I am invited in to have tea with the princesses or a race with a tomliboo around her very own Silverstone. So, when we were asked if we wanted to review the new PJ Masks Turbo Racers, toys that combine both cars and figurines, how could I possibly say no?! 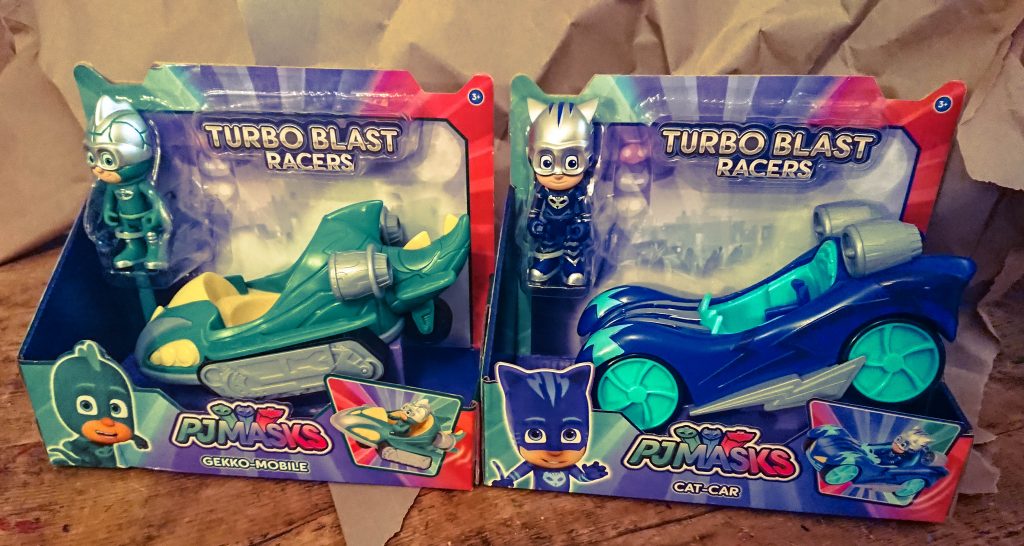 First things first…. Have you heard of the PJ Masks? It is a brilliant super heroes style program for our littles – think of it as training for growing up loving all things super hero like Marvel. In the UK, you can watch PJ Masks of Disney Junior, Tiny Pop or on their very popular Youtube Channel which streams full episodes for children to watch (did not know this before – brilliant!) 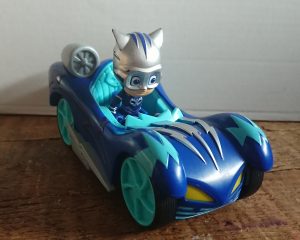 The show is all about three 6 year olds, Connor, Amaya and Greg who at night turn into the PJ Masks…

“Catboy, Owlette and Gekko are our heroes, who swoop into action at night, solving mysteries that arise during the day and on a mission to make things right for everyone in the daytime world.

It’s not always easy to be a hero, especially when there are some pesky villains up to no good. Romeo, Luna Girl and Night Ninja consistently put our heroes to the test, committed to causing trouble but always managing to leave a clue behind!”

So, PJ Masks have newly released their new Turbo Racers which are models of the characters vehicles that they drive and each comes with their associated super hero figurine too! We were lucky enough to get sent the Cat Car and the Gekko-Mobile. 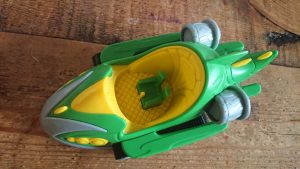 The main thing you need to know is that they are super easy to get out of their packaging so you won’t need to go and get some brand new qualification or power tools to get them out like some toys. The vehicles are super lightweight and have no drag to them at all meaning they are really easy to push and pull around. If you look at the cars from all angles they have lovely little details right down to even having buttons on the dashboard so that the heroes can drive their cars!

The figurines have great detail on them right down to the flexi-movable tails around the back. Both arms and legs are movable meaning you can put them in different positions. There is a seat in each car for the characters which requires you to bend their bodies in half and push them down to sit. This is the only thing we found a bit tough as it takes a fair bit of pushing to get them to “lock” into place on the seat and again quite a bit of pulling to get them out. However, as each seat is sunken into the car you can just rest them on top as they won’t be falling out any time soon.

Overall, we were really happy with the PJ Masks Turbo Racers and have been racing them around our masking tape carpet race track and then they have been jetting off to save the princesses who have been getting into all sorts of mischief. As well as the Cat Car and Gekko-Mobile you can of course also get the Owl Glider and these are just the start of the whole new PJ Masks toy range which has been released for 2018.  Just to give you a heads up, in April they’re releasing Romeo’s Lab Playset so not only will the kids be able to play the heroes, they’ll also be able to play the villains too!

If you’d like to buy a Turbo Racer or see the WHOLE NEW RANGE of PJ Masks Toys, head on over to Smyths Toy Store now!

*We were sent the Turbo Racers for review – all opinions are our own! 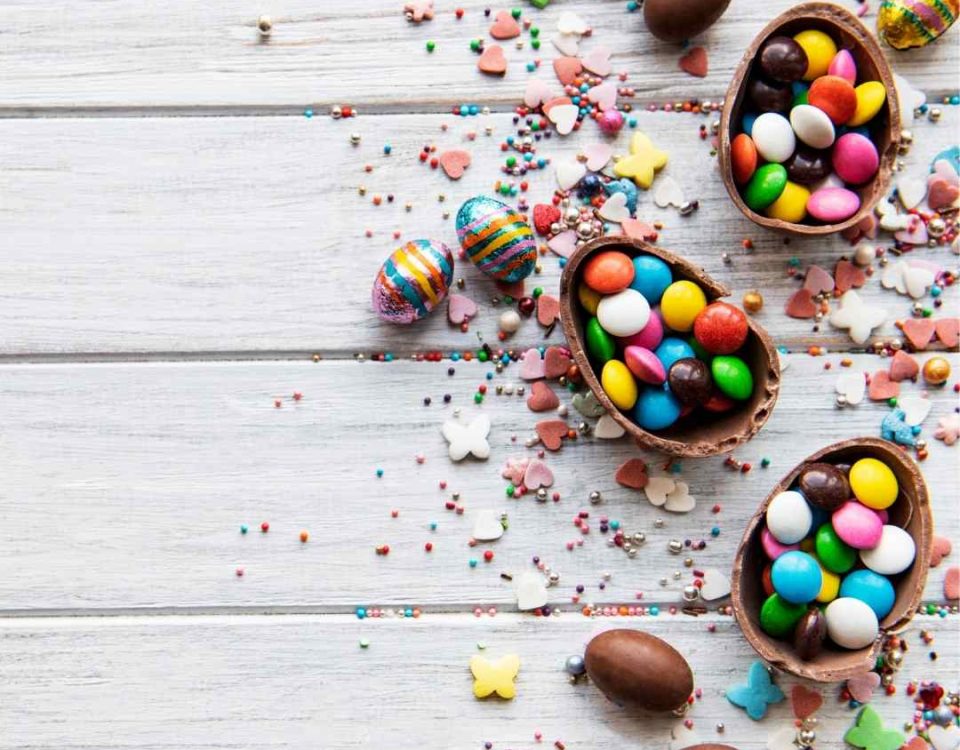