Re-Shaping My Life with So-Shape! 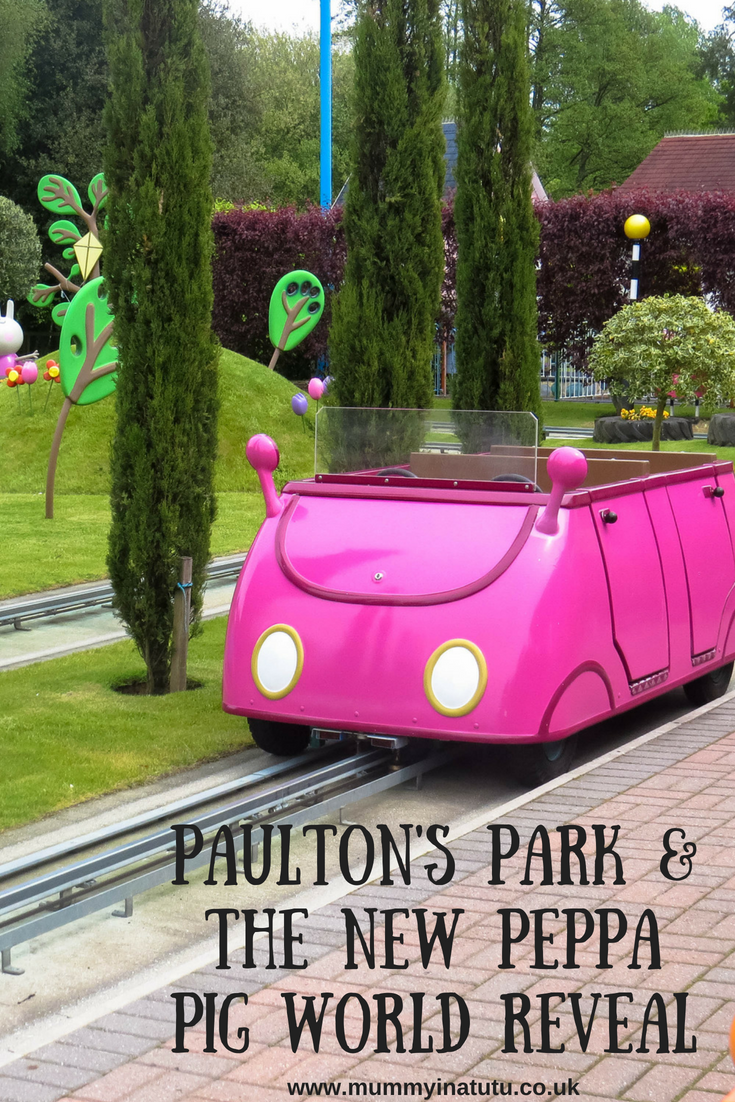 There is nothing I love more than a day out with my little one. We usually have some company with us – Nonna, Lily, Rowan, Uncle Pete or one of our lovely friends but actually Alyssa and I hardly ever go out just together. Last year, we were lucky enough to visit the amazing Paulton’s Park which just off the M27 in Hampshire is not that far from us at all. At the time, Alyssa was just turning two and was primarily interested in the sandpit park and the water jets and that was pretty much it so it was fortunate that we went with Rowan who tried out everything else. However, a few weeks ago, Paulton’s Park got in touch again and asked us if we’d like to attend their VIP Event Preview  to unveil the two brand new rides that were being opened in Peppa Pig world. Of course I gave a resounding YES! and on the day, it was just Alyssa and I that hopped in the car and headed on our way… 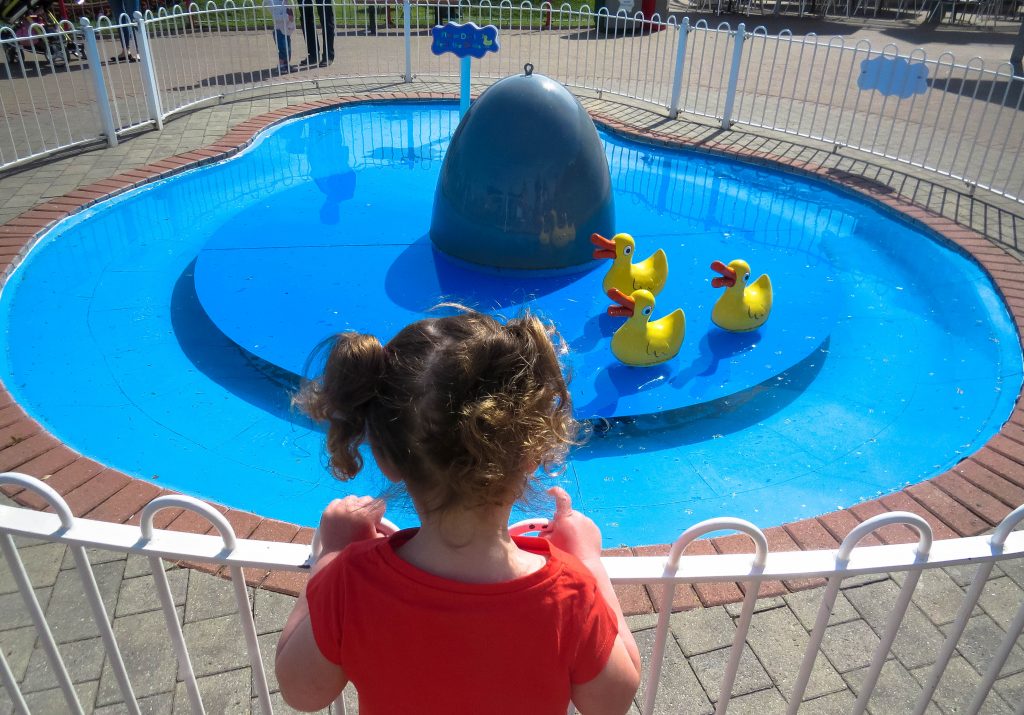 We were very pleased that as soon as we walked through the entrance doors we bumped into the lovely Pass the Prosecco and spent most of our wonderful day with them.

We knew the event was going to be a pretty big day so we thought we’d head straight towards Peppa Pig World to try out the whole new experience early on before more people arrived. It was a beautiful sunny day and with it being term time we were delighted that it wasn’t too busy meaning that on the general rides there were hardly any queues.

On the way through to Peppa Pig World, we did have to make a brief pit stop at the Baby and Toddler sandpit park as well as the old school Victoria Carousel which is honestly one of my favourite rides as it is a true classic. 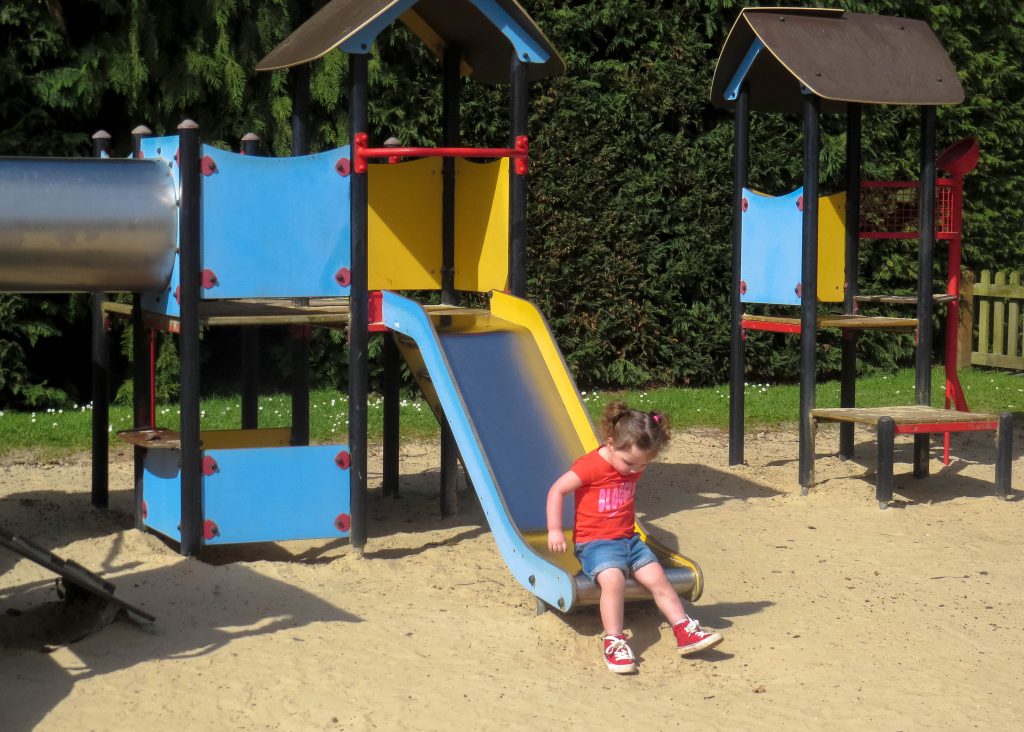 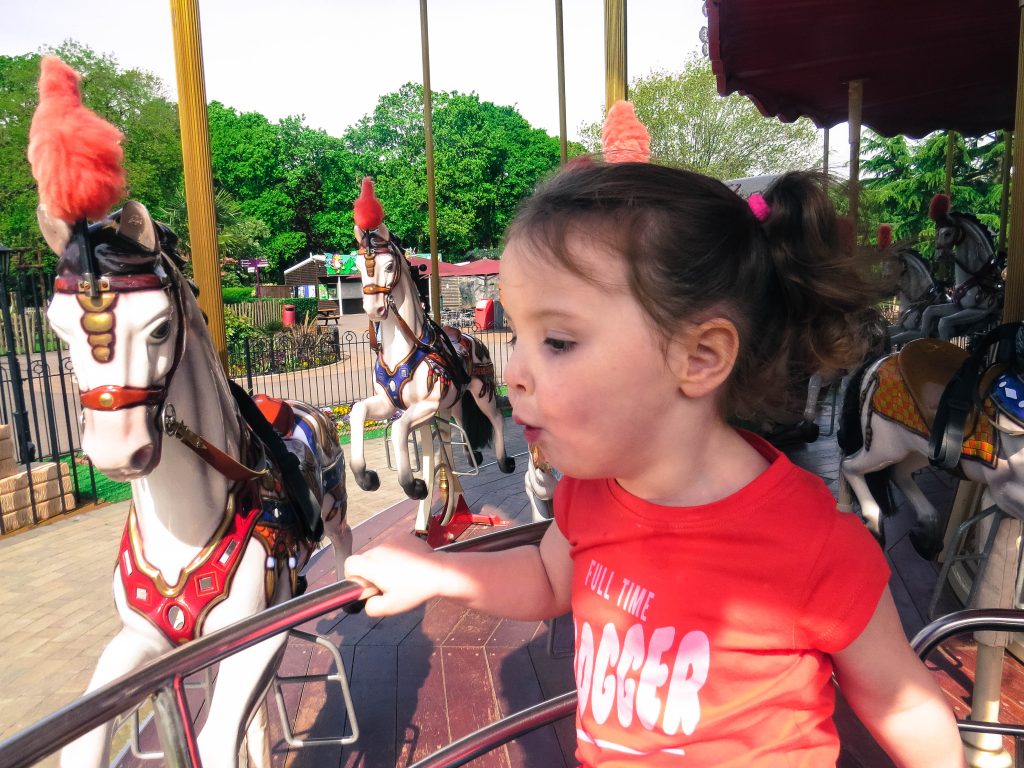 However, we then headed straight over to Peppa Pig World to take a look at the new and amazing rides. Pass the Prosecco had never been to Paultons at all and Alyssa was too young to remember her last trip here so the “wow” faces they made were pretty awesome as we passed over the tracks into the land of the pig! 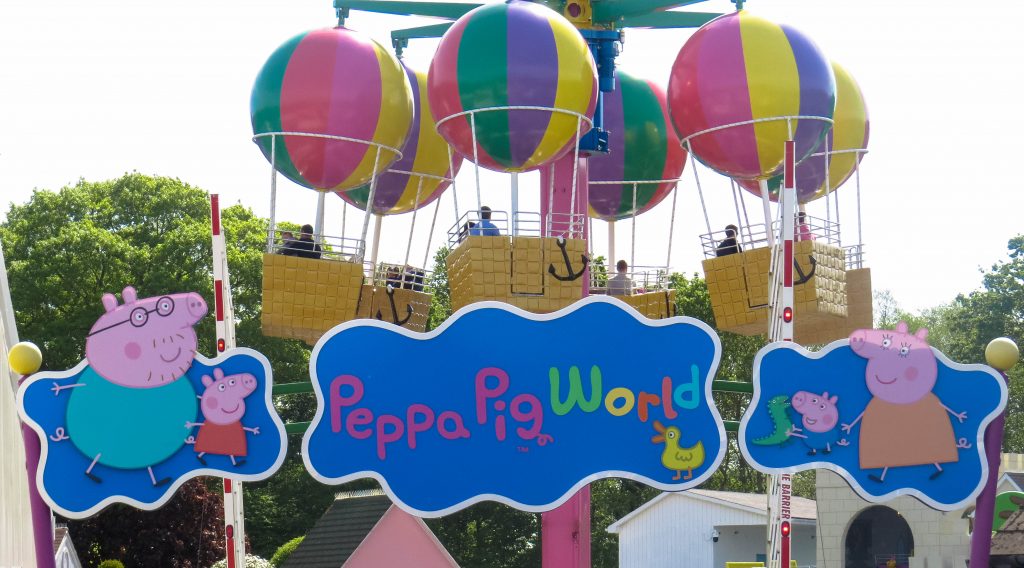 As I said, we decided to head on over and check out the new amazing rides that would be opening to the public in a week’s time (16th May 2018 just FYI!) The new area is very much in keeping with the rest of the Peppa area and has the same style and decorations. The first new ride we went on was Grampy Rabbit’s Sailing Club which is a lovely gentle ride in what look like royal coaches! They are little circular bubble boats that float around a big loop. They can seat four people at a time with plenty of room and you float around past pirate islands and get to see most of the character’s from the hit TV show sensation! 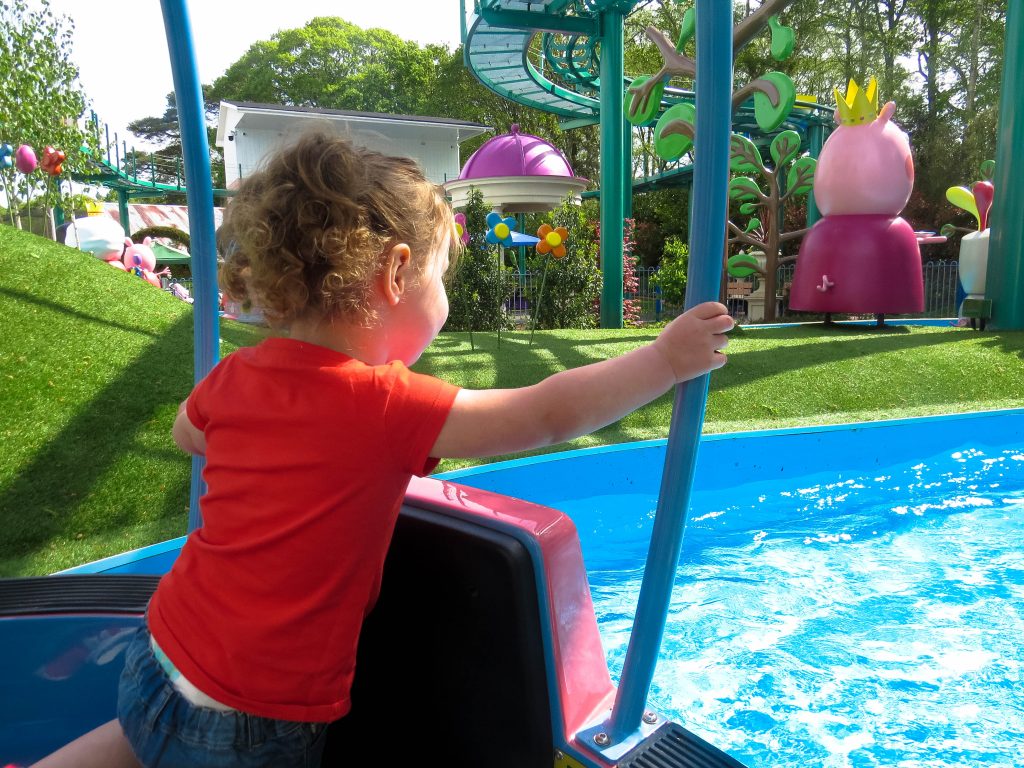 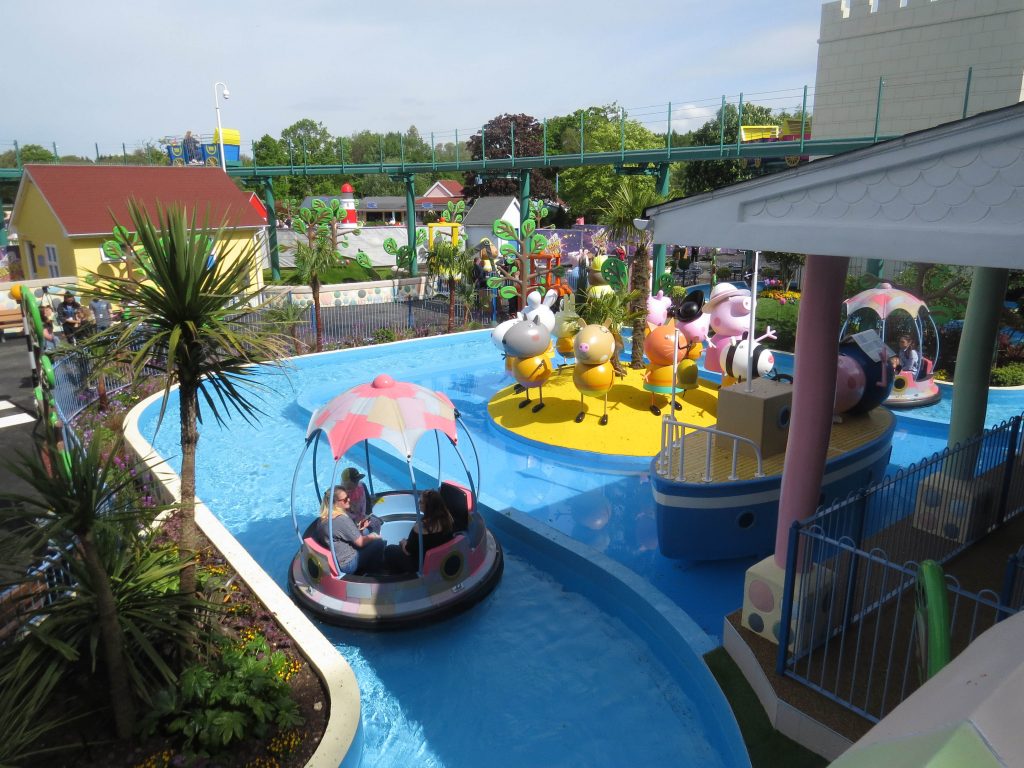 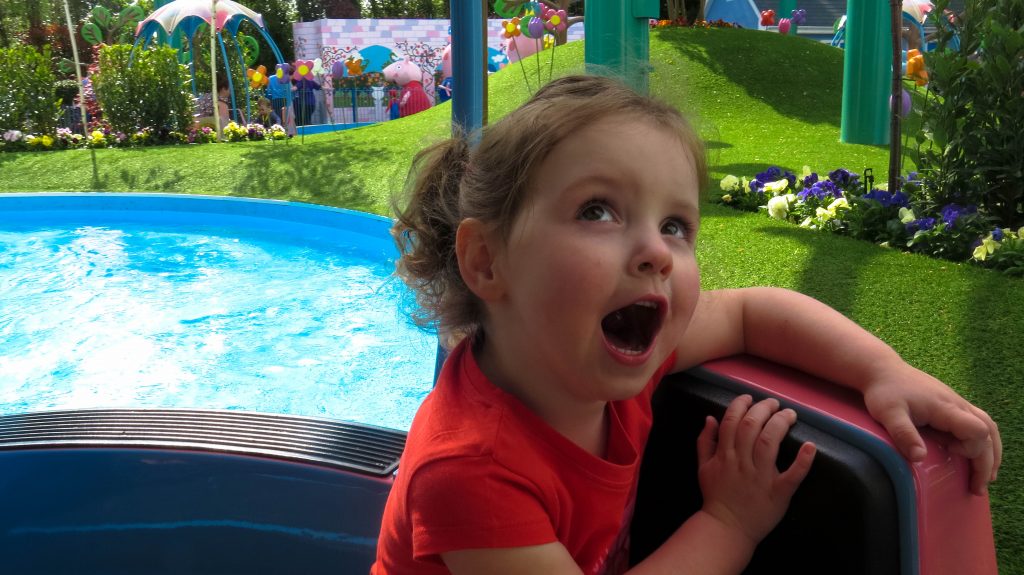 Obviously you can also hear the classic Peppa Pig theme tune (which will in fact stay with you until your dying day!!) so my little one of course felt the need to sing along even though there aren’t any words!

The entrance to the ride is great – there are a few steps but all safe and it’s nice because you can see what’s going on with the ride as you wait which built the excitement.

Then we tried the second ride which we could actually see from the outskirts of Peppa Pig world and that was The Queen’s flying coach ride. So to one side of the new area is a huge replica of the Queen’s Castle from Peppa Pig – down to every last hand painted brick. We told the children to look up at where we were going next and there were several oos and ahhs! 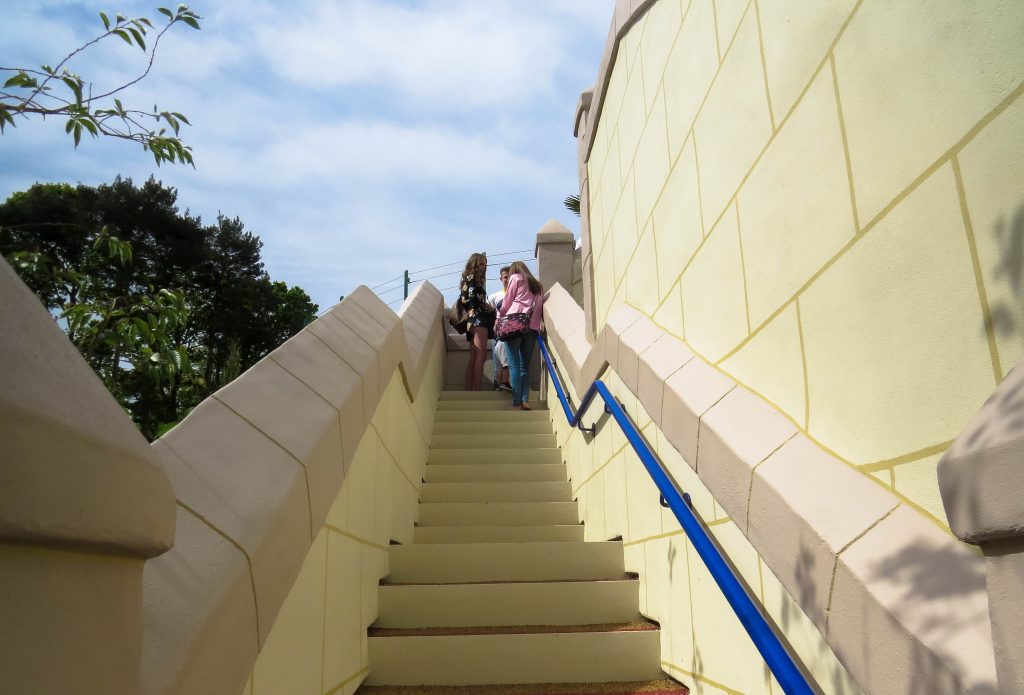 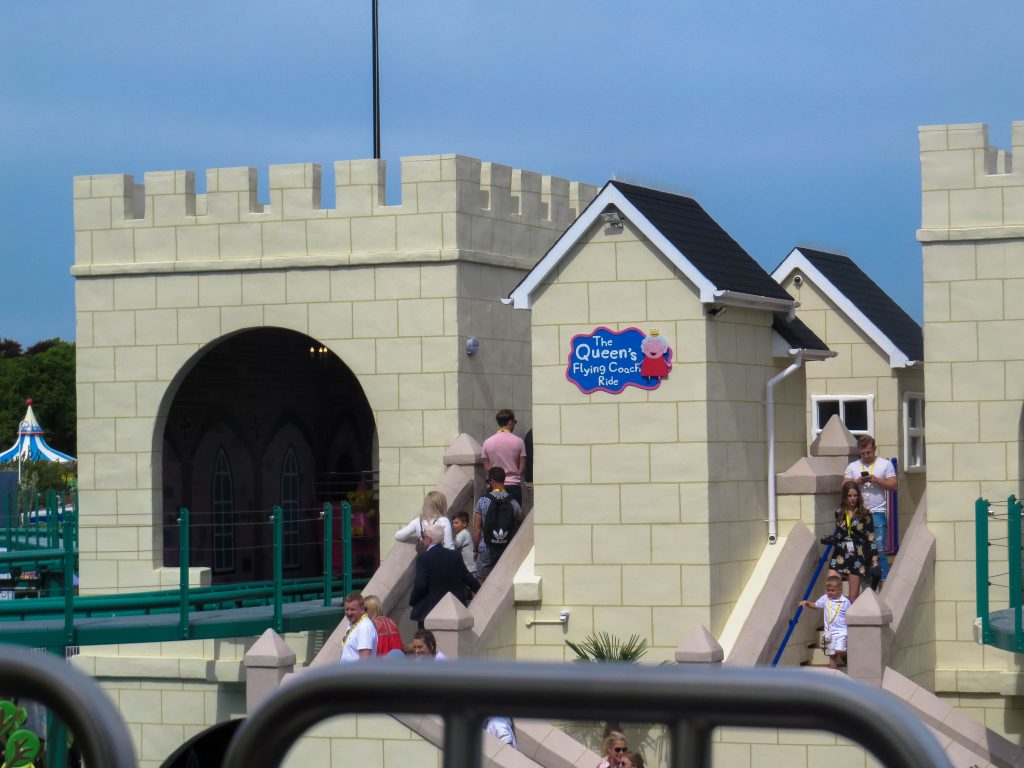 You climb up to the top of the Queen’s castle to board one of her carriages to take you on a gentle monorail journey throughout Peppa Pig world where you can look down and out across the whole park! 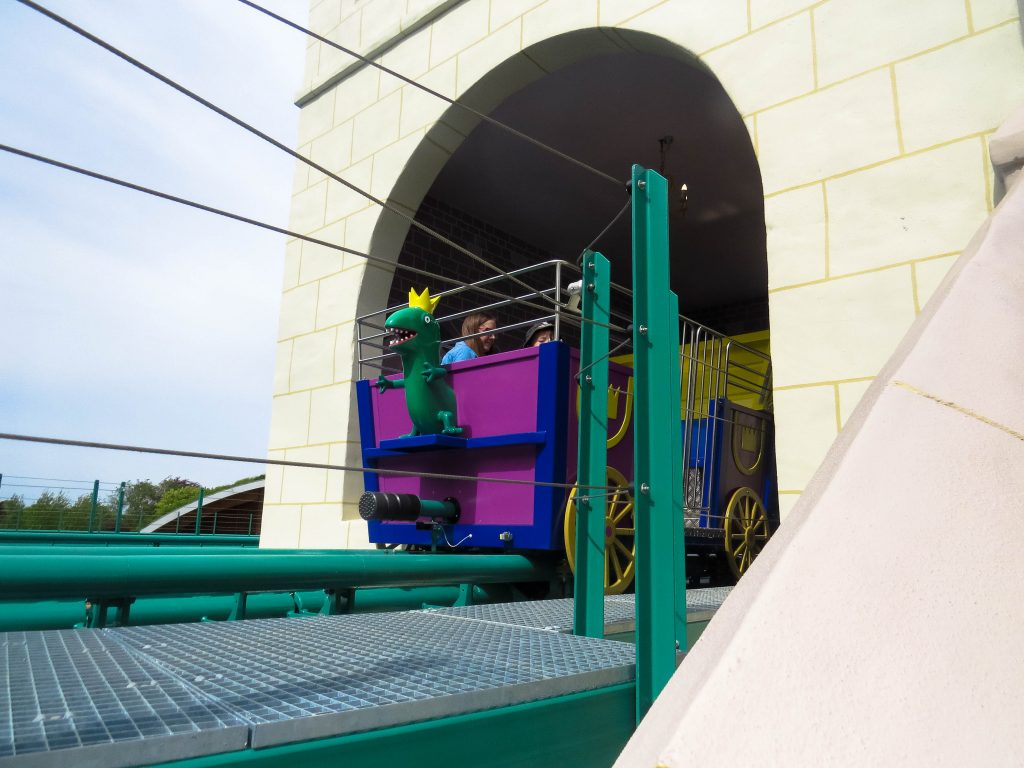 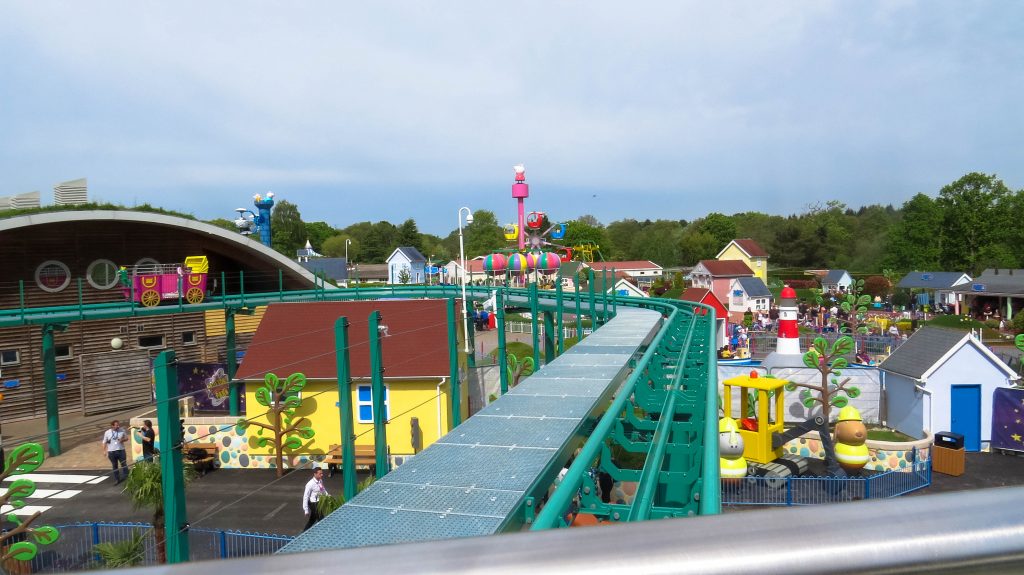 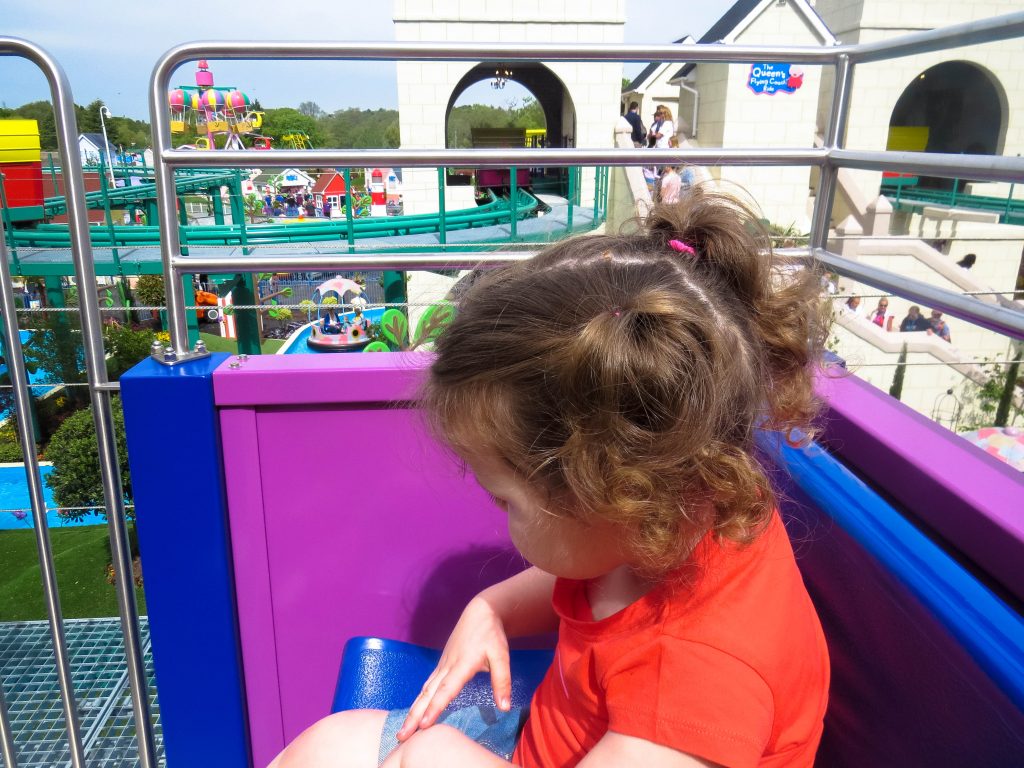 Now, I am not one for heights at all but I didn’t feel too bad in this at all. It isn’t bumpy or jolty so I felt quite relaxed. Except for the fact that my child could stand up if she felt so inclined. She tried to do this a few times to see out as obviously the sides were quite high up for her. I think it would have possibly been better with some windows in the walls of the carriage or seat belts and lower sides – only for the little ones!

What absolutely made this ride was the Queen’s narration as you go round – absolutely bloody hilarious and totally made the ride the best one yet! Below the castle is also The Queen’s Kitchen which is a little cafe selling lots of goodies and treats. Sounds weird but there are also some amazing toilet facilities in the new area ( though actually Paultons have great ones all over) which include several baby changing stations, a breast feeding room and a toilet that has a seat for your little one to sit in! 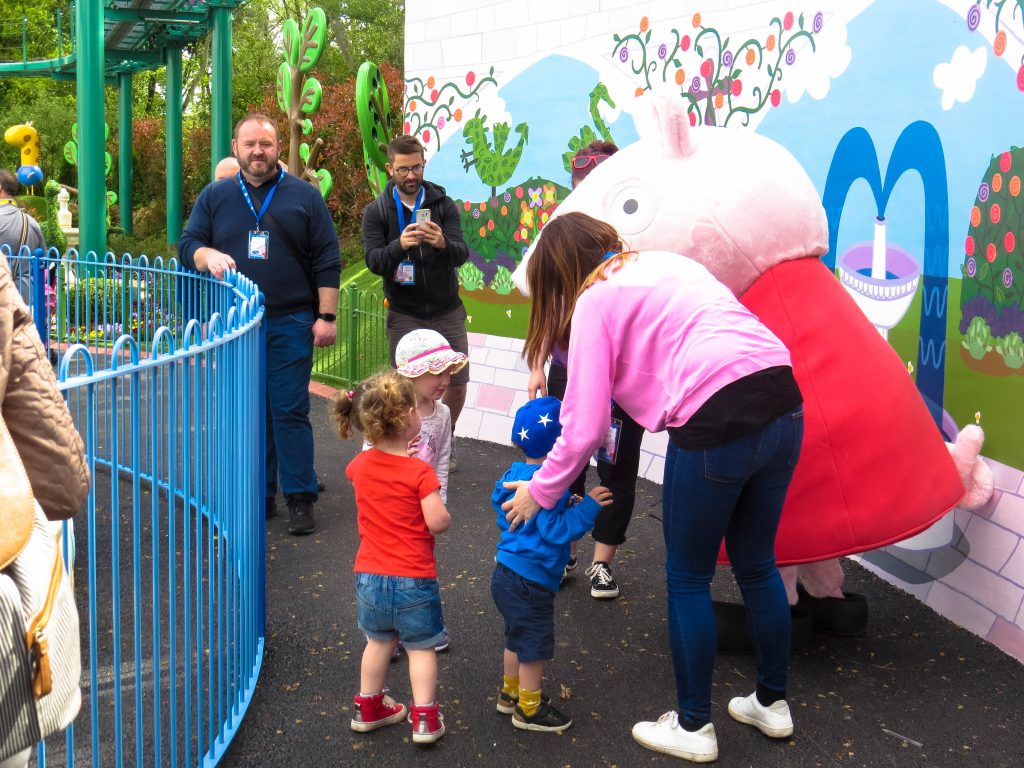 We were also lucky enough to have a brief meeting with Peppa too which intrigued Alyssa no end – she was kind of like… how is she here when she’s meant to be on Tv!

We then headed back out into the main park to enjoy the rest of our day at Paulton’s Park! 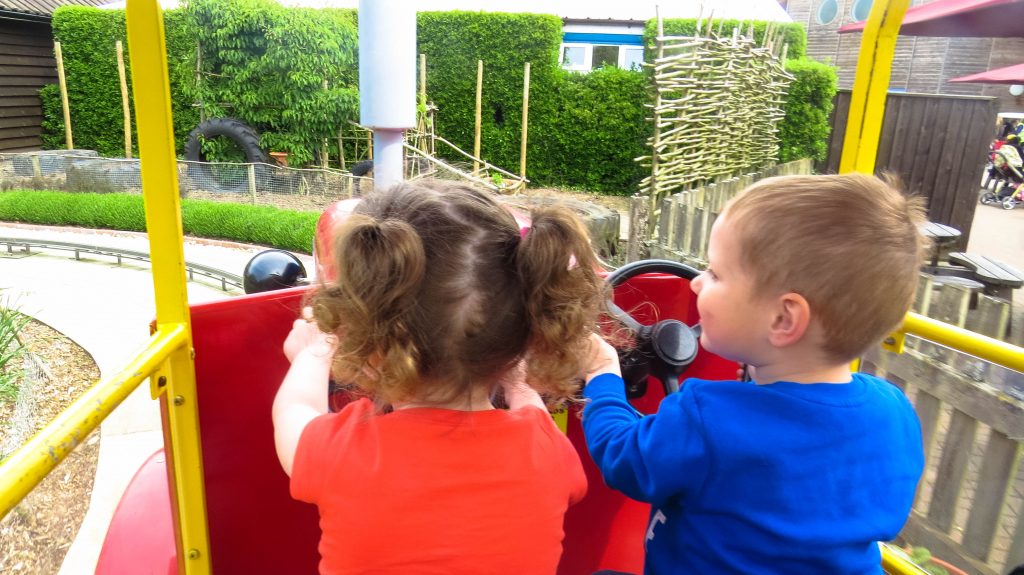 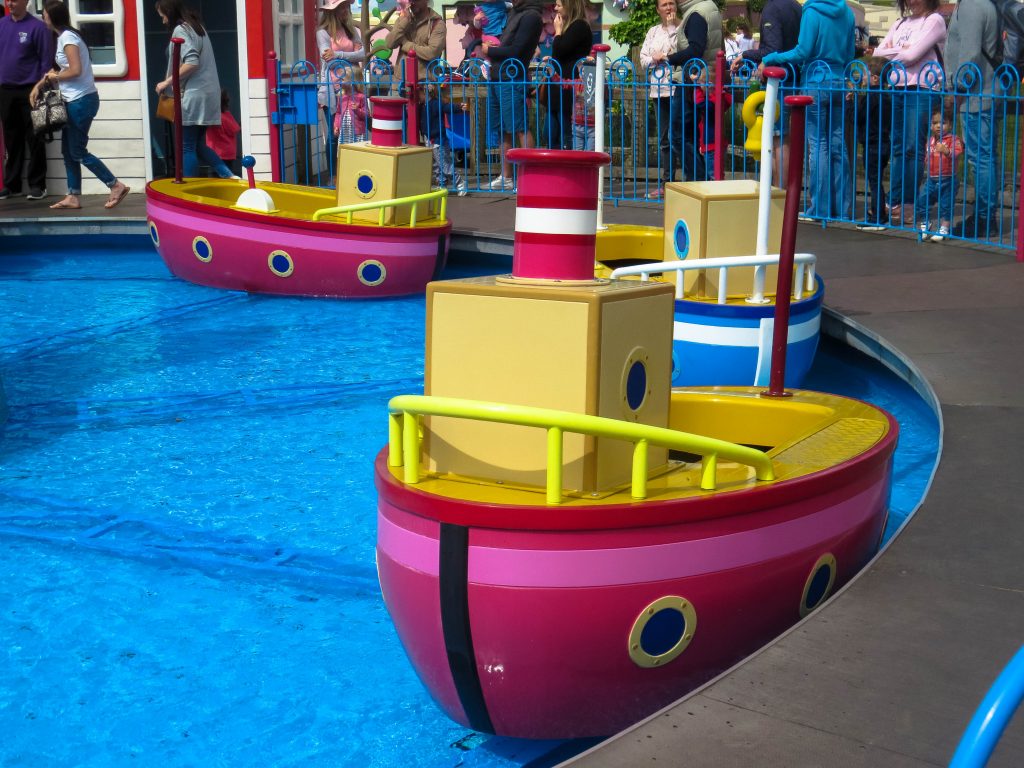 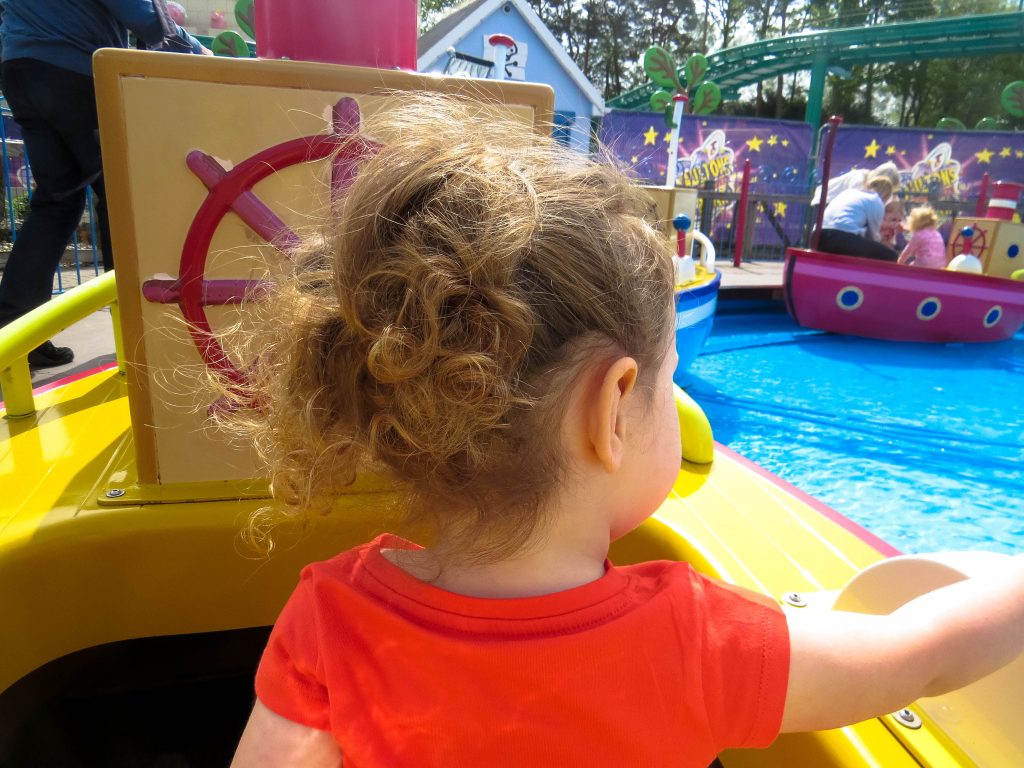 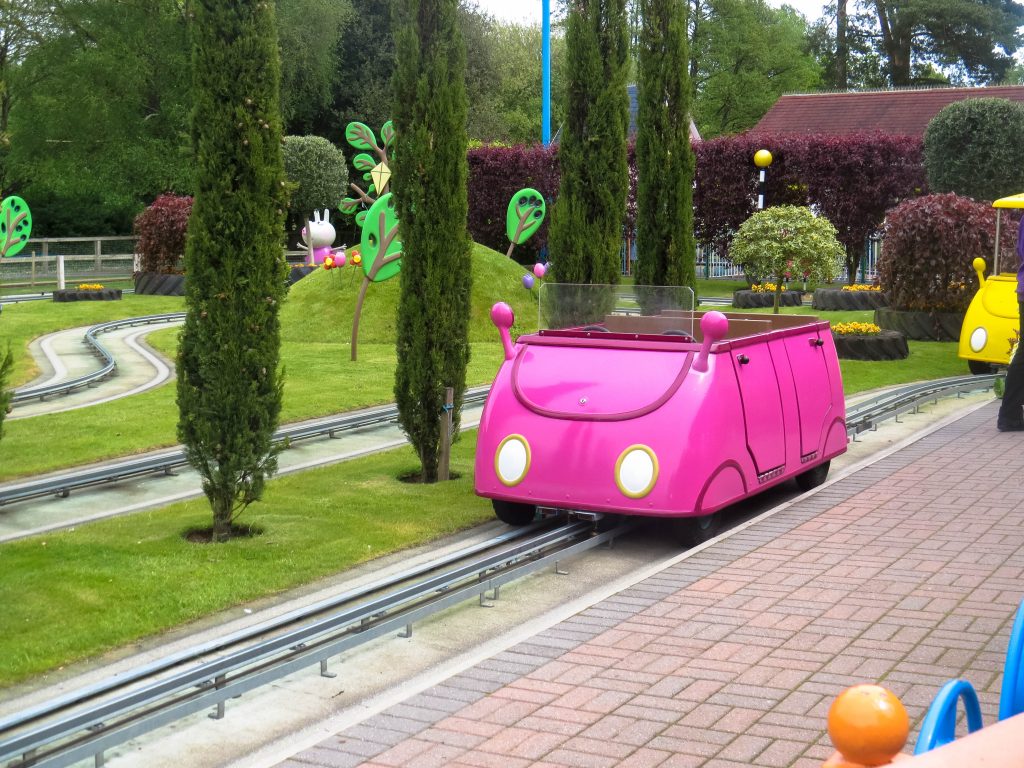 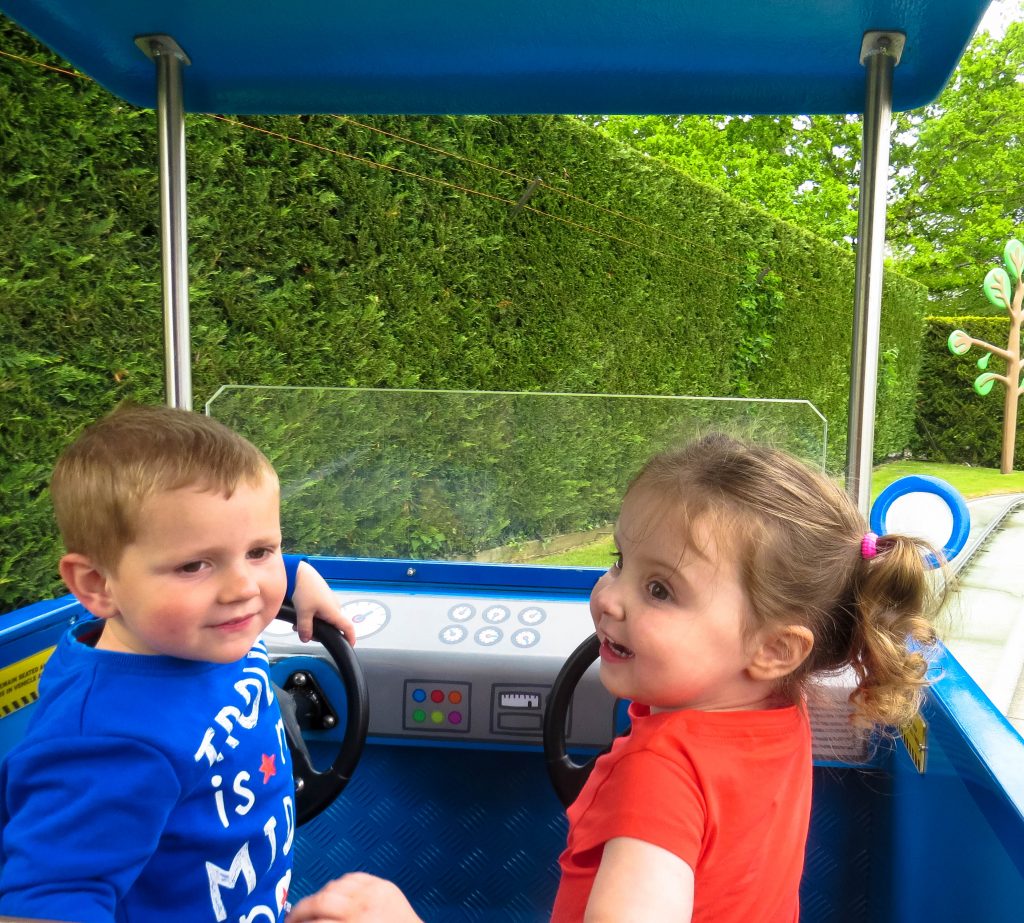 Honestly, we had an amazing day. We went round all the Peppa Pig world rides and bumped into the lovely Whinge Whinge Wine and Bridie by the Sea. Alyssa and I also headed back through the beautiful gardens and had a wonder around all the statues and flowers before ending up back at the beginning and heading into the gift shop! 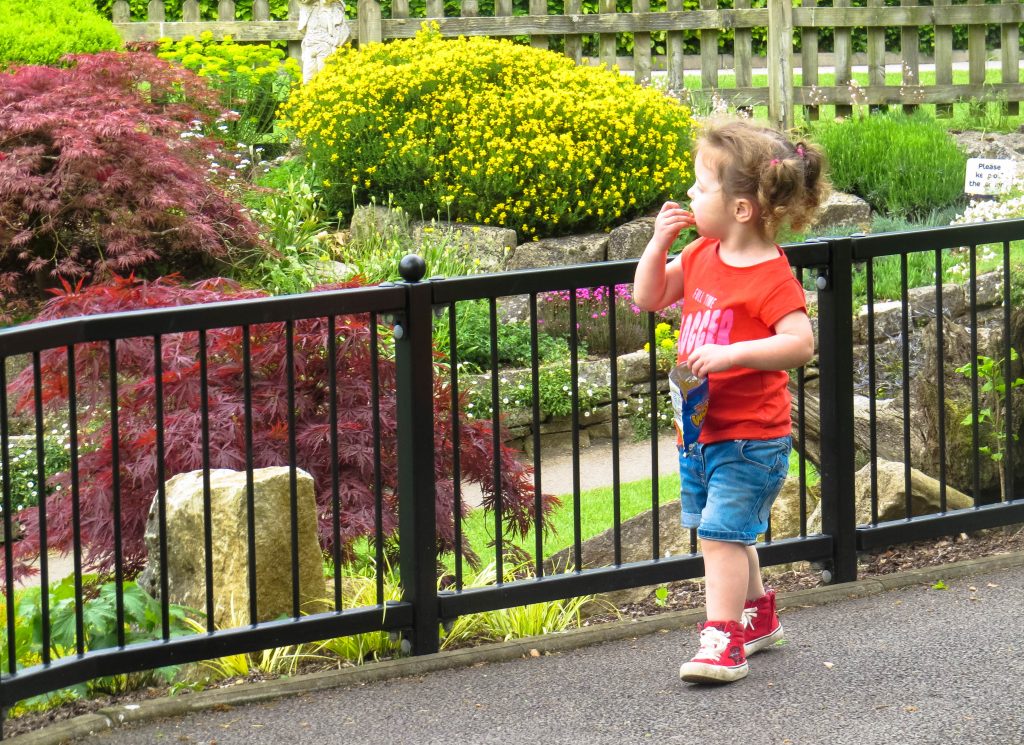 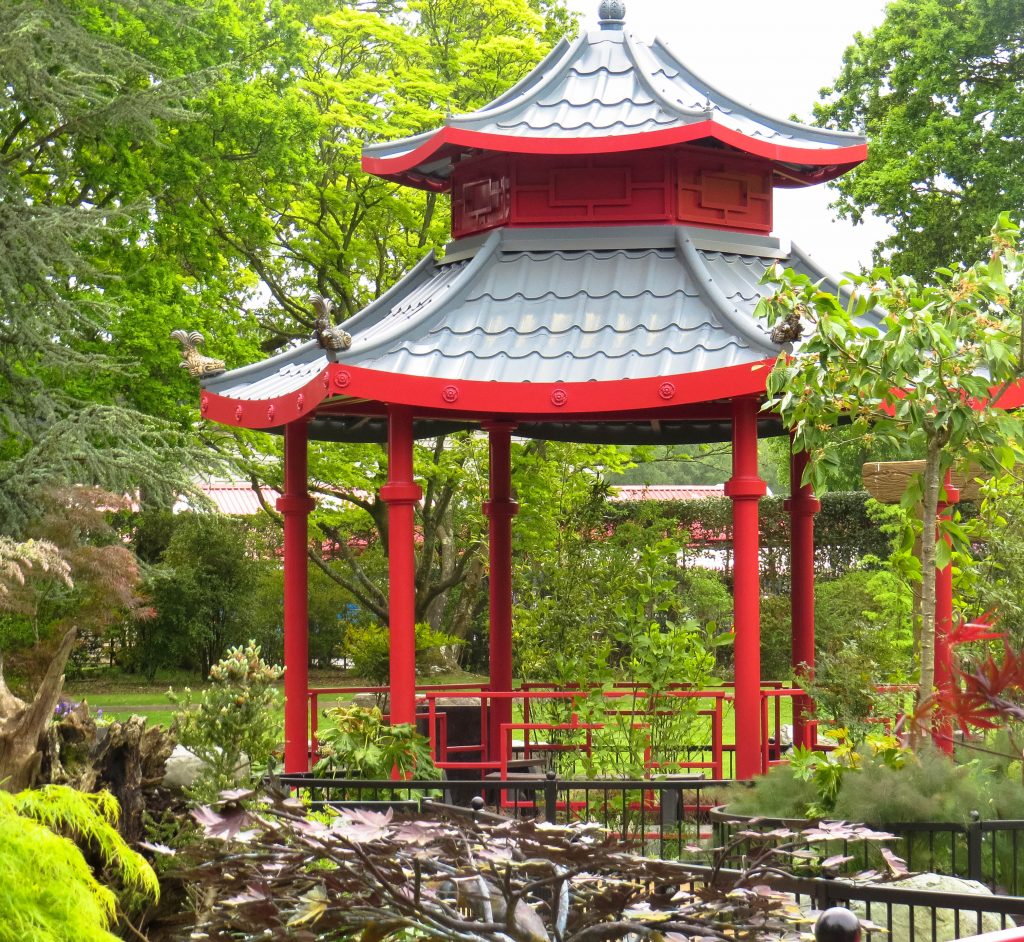 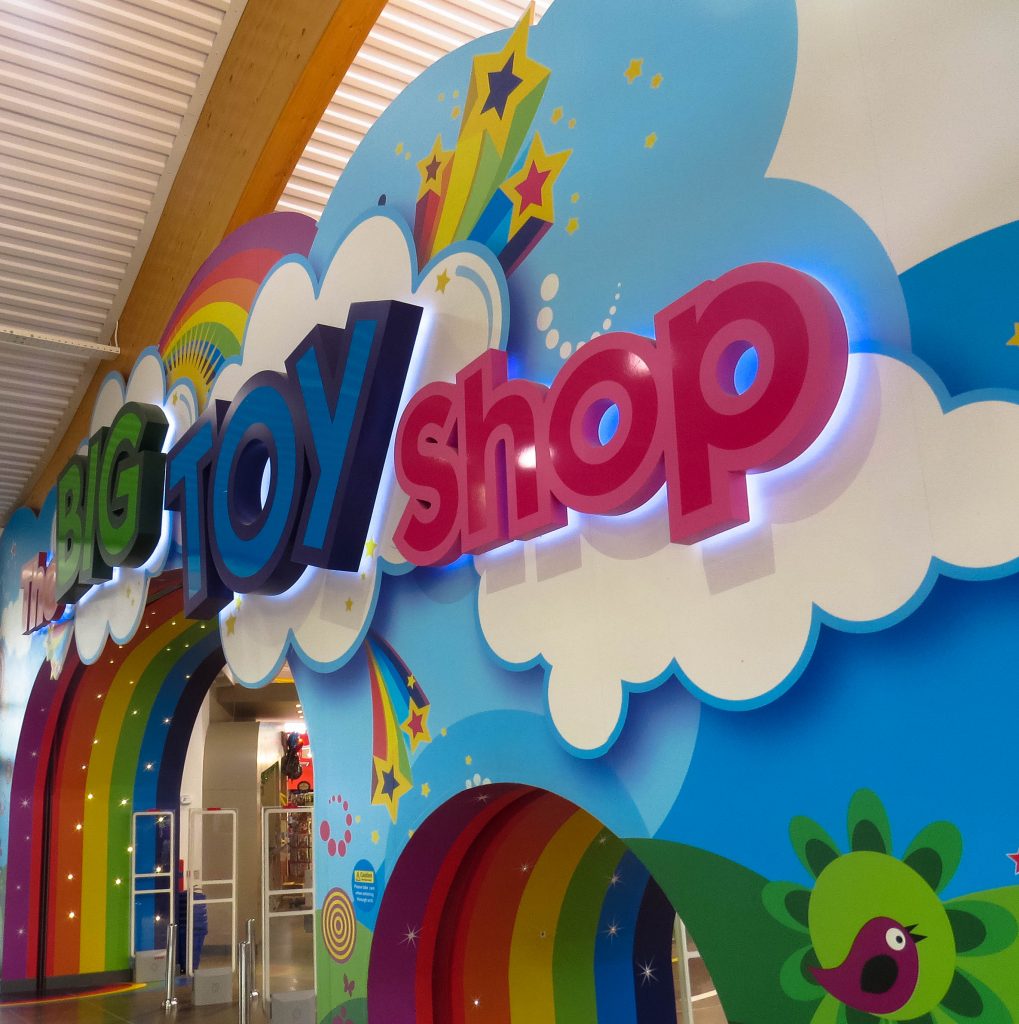 If you have never been before or haven’t been for a while, I urge you to head on over to Paultons Park and enjoy the brand new Peppa Pig rides as well as the rest of the park. They have a new Africa section with animals such as Meerkats too and if it’s a bright, sunny day then don’t forget the swimming costumes for the kids as they have a great splash park area too!

Thanks Paultons – we’ll be back soon!

*We were gifted entry for the purposes of the review – all opinions are our own. 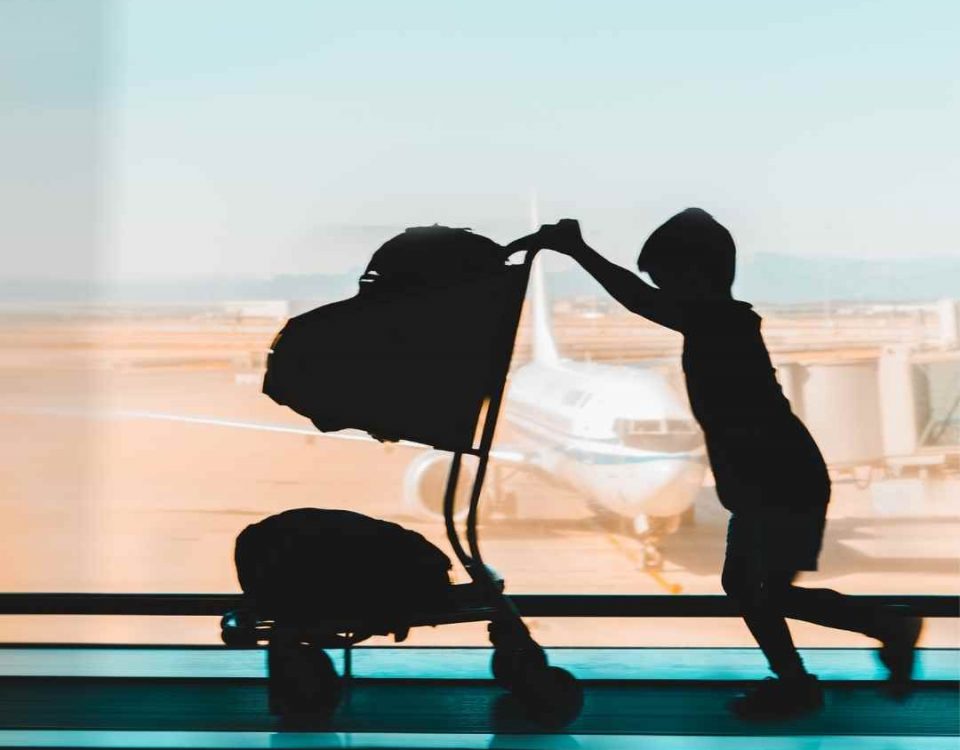 The Best Advice I Can Give You When Travelling with Kids….