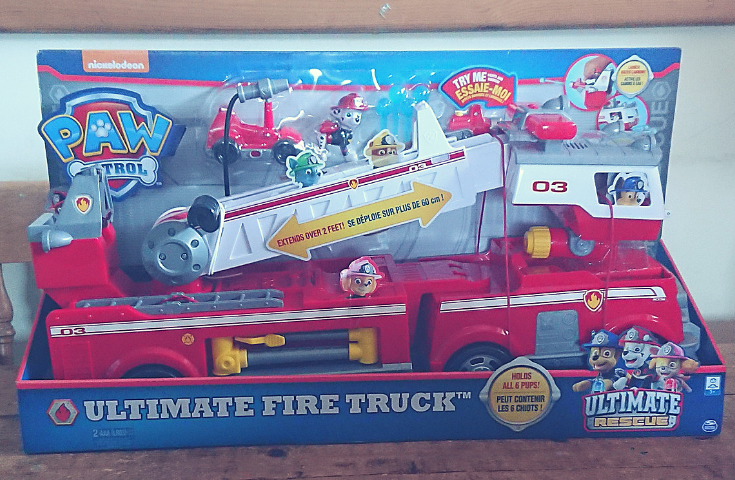 For a while I was a quietly smug parent. Apart from a brief obsession with In the Night Garden when she was young, Alyssa wasn’t falling foul to any of the TV programs that children seemed to love. Yes she’d enjoy watching them but she wasn’t overly fussed. She was quite content to move onto the next or watch a bit of Disney. Then I made the huge mistake of allowing her to watch a single episode of Paw Patrol and she was a gonner. It wasn’t long before I could recite every single word of most of the episodes and despite having just watched every episode from start to finish, nothing was going to stop her from re-starting the loop over again. So when I was asked if we’d like to review the Paw Patrol Ultimate Rescue Fire Truck my head was screaming no but my heart knew I’d have one very excited little girl! 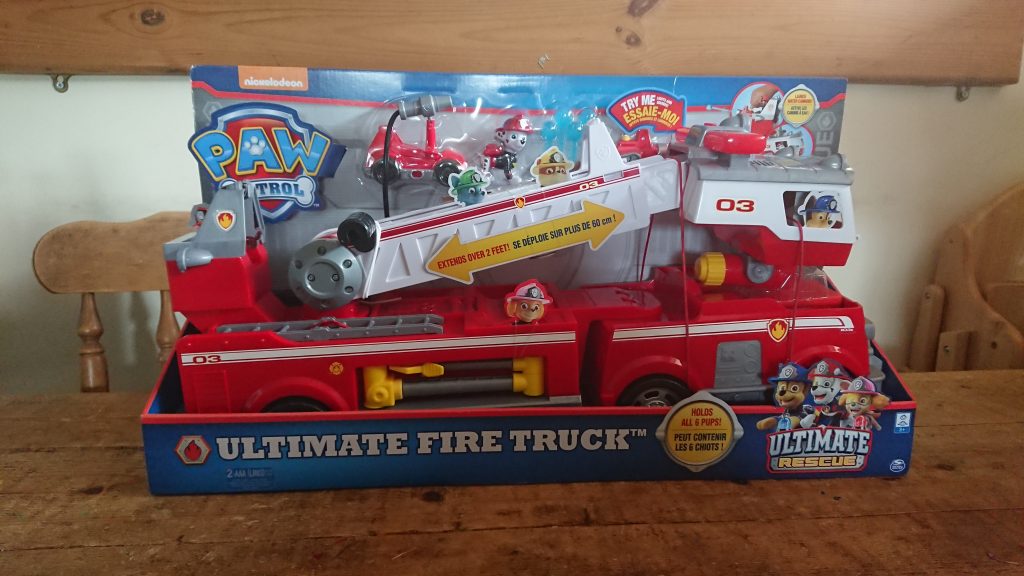 I had thought when I heard we were receiving the Ultimate Fire Truck that it would be the standard size of any fire truck toy… boy was I wrong. The clue should have been when I saw a picture of it next to a child – how I didn’t realise it was half the size of them was beyond me?! Needless to say… it is big, so this isn’t a toy for people with limited space! However, this is a toy for huge Paw Patrol fans! 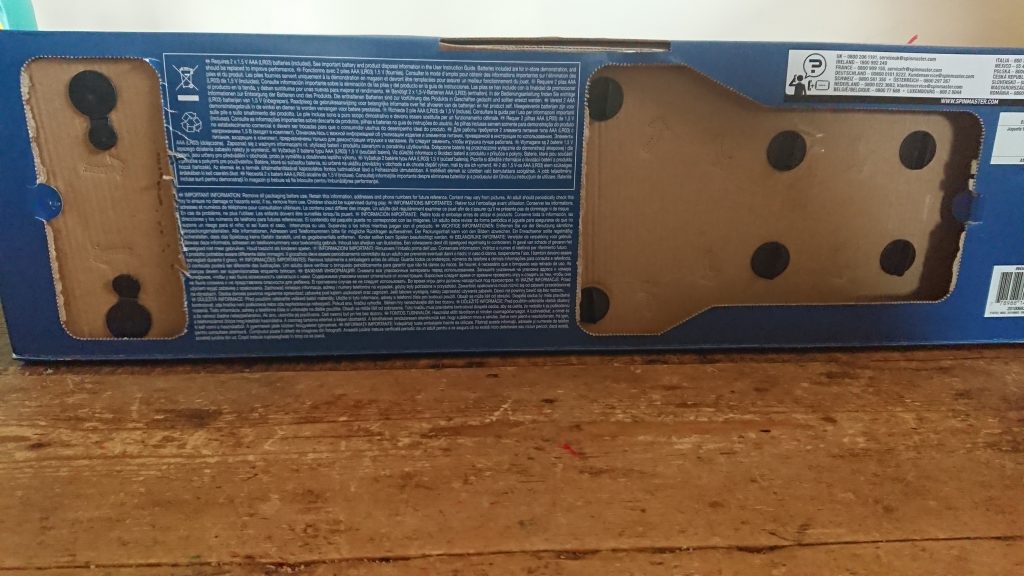 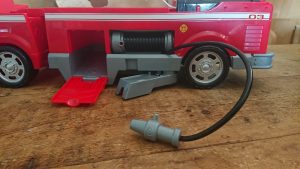 To unbox, you simply need a pair of scissors to snip the strong that is holding certain parts in place and then underneath there are some perforated edges to the box. If you press them out you can access the plastic screws holding the toy in place and you simply twist and pull. The smaller accessories like Marshall, the mini fire car and the water cannon pieces will need to be snipped out of the plastic on the front. Make sure you get all the tiny little elastic bands holding things in place and then simply add the few stickers supplied. 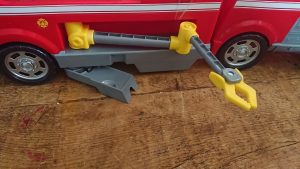 Set-up is literally adding the stickers and clicking the water canon onto the back of the fire-truck. On first glance and particularly when shopping online you may think this comes with all the Ultimate Rescue figures but it doesn’t. Only Marshall is included but the others are all available with their vehicles… which FYI are all a lot smaller than this. The Fire Truck requires 2 x AA batteries in the Cab where the on/off switch is but they should come with it.

It comes with a removable ladder, four water ‘pellets’ and a mini fire cart big enough for one pup which fits inside a special compartment in the side of Marshall’s Fire Truck. The extending white ladder on the top of the truck lifts up and extends up into the air and also has room for both the pups and Ryder to sit in. The ladder can be raised by pulling the handle up on top but you need to make sure the stabilisers underneath on each side are out first in order for it not to tip over. 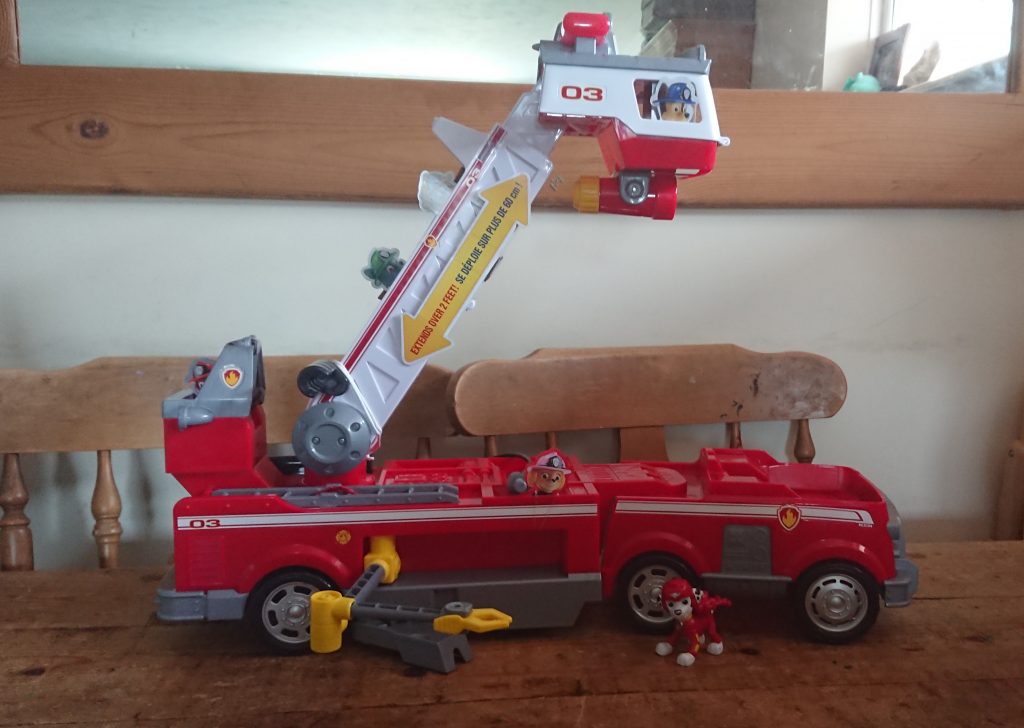 This toy is absolutely epic – I’ve hidden it away to give to Alyssa for Christmas and I just know she is going to freak out when she sees it. In my opinion it’s a great toy and has lots of features that will be great for imaginations and fans of paw patrol!

The Paw Patrol ‘Marshall’s Ultimate Rescue Fire Truck’ has an RRP of £69.99.

It is however a huge vehicle with a lot of play potential and definitely worthy of a main Christmas present for a HUGE Paw Patrol fanatic! 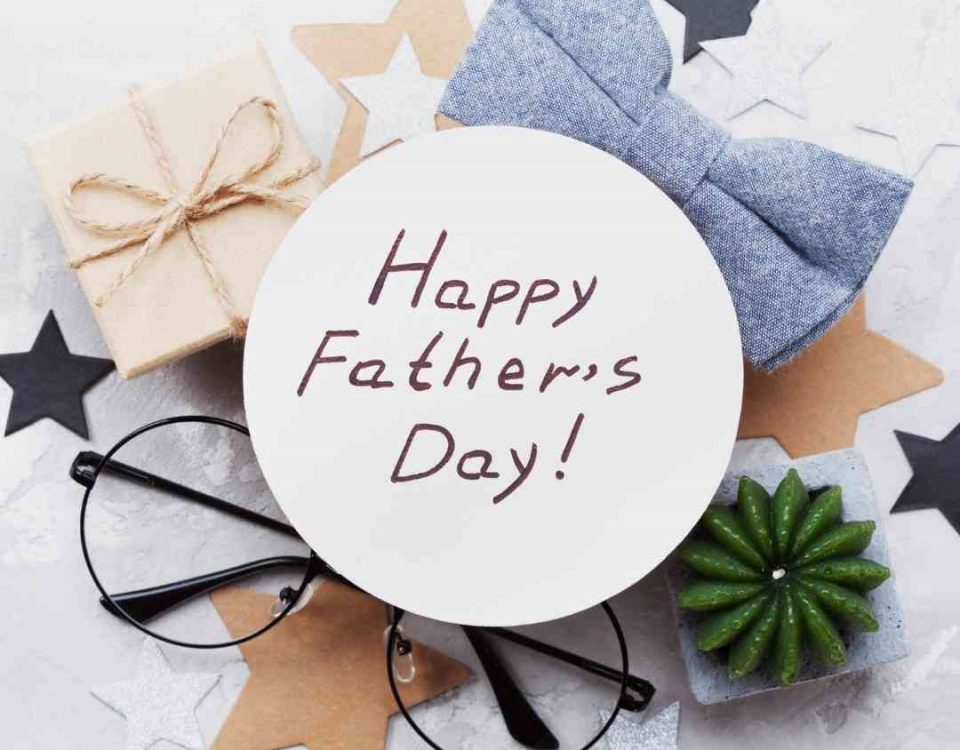